Please allow up to 10 business days for orders to be processed and shipped. Dismiss

Handy Tips For Anyone Who Owns A Soy Candle

Trim your wick to 1/4 of an inch every time.

Why trim? It gives your soy candle a brighter, cleaner burn. Leaving your wick untrimmed and laden with leftover carbon leads to a duller light that’s more likely to produce smoke. That smoke can also stain your jar, which honestly screams, “I don’t know how fire works!!!”

A good rule of thumb is to trim your wick after every four hours of burn time. When it comes to trimming, always extinguish the flame (obviously), let the candle cool to room temperature, and then trim the wick to 1/4 of an inch. You can trim it with a lil’ scissor or spare nail clipper.

To prevent tunneling, burn your soy candle one hour for every inch in diameter the first time you light it.

Fun fact: Your soy candle has a memory. The wax will only melt as far as it did the first time you burned the candle. So, if you don’t melt the entire top layer of wax on your first burn, the candle will tunnel its entire life. YIKES. To prevent this, candles should burn one hour for every inch in diameter. For example, if a candle is three inches across, it should burn for three hours to melt the top layer evenly. While the first burn is most important, you should strive for an even burn every time — both to avoid tunneling and to achieve the biggest and boldest smell.

Use aluminum foil to fix tunneling if you already messed up.

You can get rid of that unsightly tunnel by folding a piece of aluminum foil in half, wrapping it around the candle, and then folding it up over the flame like a tent (leaving a hole for it to get oxygen). Keep the foil on for about 30 minutes, and all of that built-up wax should be melted off the sides. Careful though that foil maybe hot to touch. 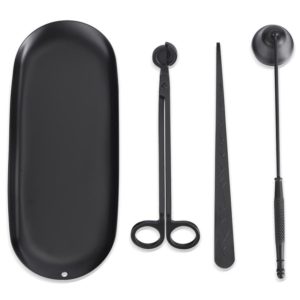 Get yourself a multi-wick candle if you want an even burn with less hassle.

If you don’t have three hours to dedicate to burning your candle evenly, just buy a multi-wick candle instead. It’ll melt the entire top layer of wax much faster with all of that extra heat.

Keeping your candle near open windows, fans, AC units, or highly trafficked areas in your home will disturb the flame, causing it to create black smoke stains or soot buildup on your candle jar.

Stop using your soy candle when there’s half an inch of wax left at the bottom.

If you keep burning your candle past the half-inch mark, the flame will get too close to the base of the jar and might cause heat damage to the surface the candle is resting on and to the jar itself.

Don’t burn your soy candle for more than four hours in one sitting.

A woman in Texas had to be rushed to the ER with first- and second-degree burns after her Bath & Body Works candle exploded into six-inch flames. She tried to blow the flames out, but this engulfed her face in fire and hot wax.

Here’s the thing: The candle had been burning for nearly four hours. That much burn time allows carbon to collect on the wick, leading it to “mushroom.” The wick will then become unstable and produce a dangerously large flame. Not to mention, your candle will start to smoke and soot will be released into the air. So, yeah, extinguish your candle before that four-hour mark, and let it cool for two hours before relighting it.

If your flame grows too large to simply blow it out, don’t use water to put it out. The water can cause the hot wax to splatter onto your skin and burn you. Instead, cover the candle with a lid or a snuffer, as fires are fueled by oxygen, or pour some baking soda onto it. Of course, if the fire can’t be managed with these techniques, you should use a fire extinguisher or evacuate and call 9-1-1.